Drawing a pattern when having a cold with running nose; take my advice and DON’T. Stubborn me tried it anyway but believe me, things get really messy! And I’m not even talking about my nose, just the foggy brain that comes with it. I started drawing the 3 parts bra cup I don’t know how many times. Every time I returned to a drawing after a tea break it was a mystery to me what had happened there. The drawings made no sense at all and were totally wrong. Finally I gave in and left it for a fog-free day …

Still even without a foggy brain the task at hand was not a walk in the park. So I deceided to make a quick test in lining fleece even though I knew this was not quite what I was after, Sometimes it’s easier to see what the problem is in 3D. 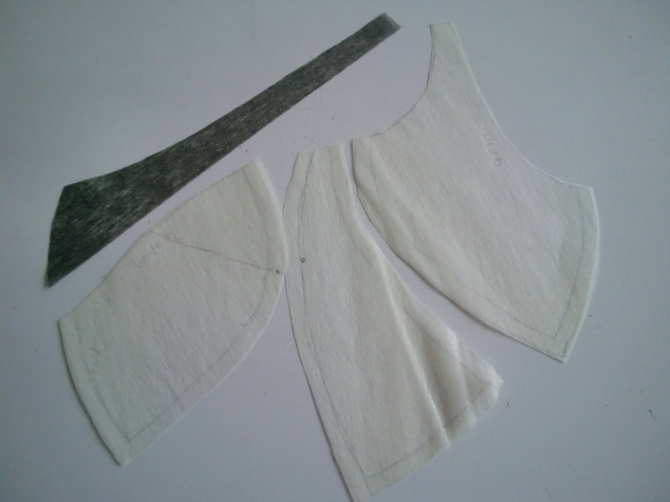 I forgot to take a picture of the drawing, sorry. But these fleece parts will give some indication too of how it was done. The black fleece is the loose strap again. The parts were sewn together and I used my all time favourite fotting band again to try it on the doll. I must admit, it turned out slightly better than expected.  No false folds or anything, the fitting was not bad at all. I just did not like the placing of the seams.

Instead of starting again on paper I simply took a marker and sketched the lines I wanted on the cup itself. It’s a rough way of indicating a coupe and still will need some detailed shaping but much quicker and easier than drawing on a flat paper only. I used to advice this method to students struggling to visualize their drawings in 3D. Just sew a cup from the basic pattern (or any other coupe seam that fitts well) and simply sketch the lines you want on it. 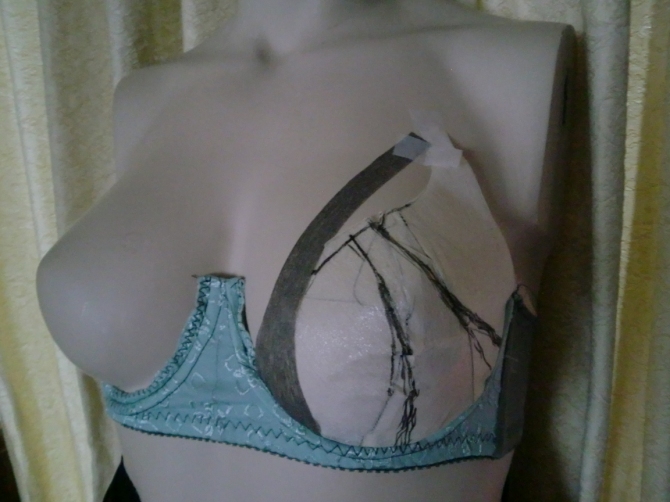 When you cut it out along the sketched lines you more or less have your pattern parts. Make sure at least one of the lines will touch the nipple which is the highest spot on the breast ‘mountain’  If you don’t the parts will be almost impossible to flatten and reproduce on paper. 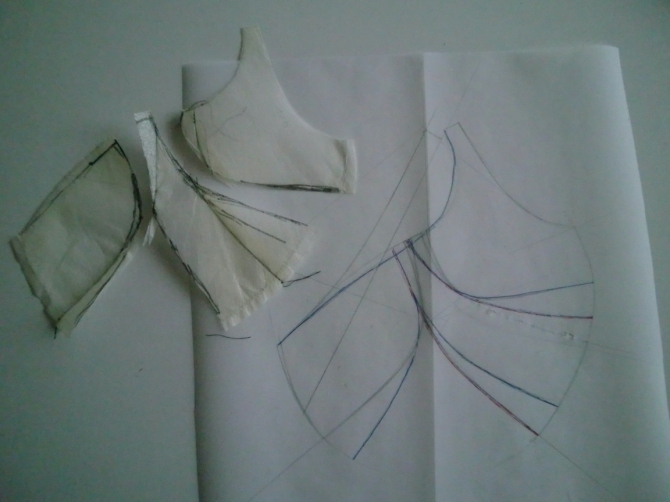 And this is how it looks like after cutting. I made an attempt to incorporate the parts in the ground pattern, these are the blue lines. The coupe seams of the ground pattern are the pencil lines which continue at the bottom. The red lines are from the center piece which seemed better placed a bit away from the side part at the top. Still following me? Told you it was gonna be a bit messy … Why make an easy pattern when one can make a difficult one; story of my life!

It does need some fine tuning because somehow the measurements are not exact anymore which is caused by the flexibility of the fleece lining. But at least I have a good indication now how to place the seam lines. And what’s more; I see lots of combinations possible by using these seams. No need to choose between designs anymore; I can use all the ideas with the same pattern. Not only the loose strap at the midfont but also the decorative power bar at the side, both ment for extra support. They can be used both or just one of them. They can be used at the inside or at the outside. It’s gonna be a very multifunctional bra!

For an overview of all the Merckwaerdigh internet activities take a look at www.merckwaerdigh.nl