Did you come across a bra sewing pattern with a lovely cup but didn’t like the band that much (or the other way around)? Well, in many cases you can exchange the cups or band with another bra pattern. Or even with a pattern for a corset or bodysuit … endless possibilities! A FREE pdf file about this matter is available for download on the Merckwaerdigh FREE downloads page!
Let me show you step by step what to consider in this process:

The same bra size for both patterns! This might seem obvious but is easily overlooked when you get caught up in choosing between a lot of different designs.
An underwired cup is required or a soft cup which completely follows the breast root because you need a reliable reference between the cups.
The length of the underwire seam has to be the same. The underwire is at a fixed spot at the armpit but at midfront the cup can be lower or higher up, depending on the design. Be sure to measure both underwire seams very precise!
The underwire casing can be either part of the band or part of the cup, this should be the same spot in both patterns. The sewing instructions should clarify where the underwire goes; upwards into the cup or downwards into the band.
Below an example where this worked out fine 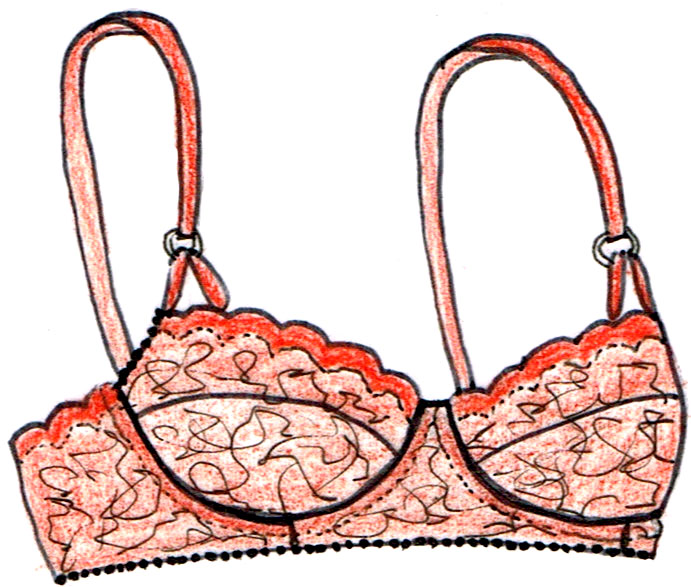 But problems can occur when exchanging an underwired cup with a soft cup. It all depends whether or not the soft cup follows the breast root. Some do but unfortunately most soft cups don’t.
In the pictures below an example of an underwired bra and a soft bra you might want to exchange the cups.
At first glance the cups are quite similar at the front, except for the sidebar of course. You could get tempted to give it a go and count on your tweaking abilities to overcome any problems. But it could be worth giving it a proper look first and thinking over the whole process. Unless you don’t mind doing a lot of sewing on off-chance.

Let’s take a closer look what happens when you try to fit the new cups in the original band.At midfront the new cups seem to be right for the band cut-out but are they really?
The original band has a small space in between the cups while the new cups are ment to come together without any space in between. Some tweaking can solve this, like adjusting the original band spacing a bit.
The sidebar without breast root rounding though has no reference at all where to connect with the band. The only way you might tackle this is to wear the band with the cups sewn only at the rounding and pin the sidebar ‘on the body’. 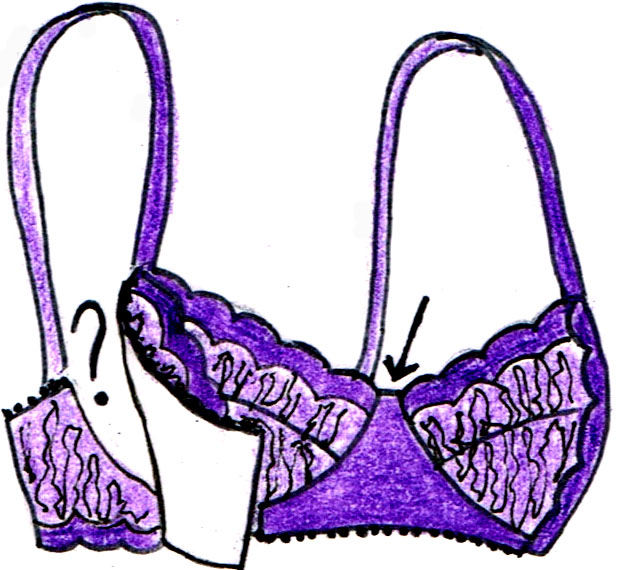 Let’s take a closer look what happens when you try to fit the new cups in the original band.
At the armpit cups and band are always at the same fixed spot.
At midfront the height can vary and in this case the cups will extend above the band cut-out. Without the support of the band bridge (between the cups) the loose parts of the cups will fall over.
Some tweaking of the band can solve this, lengthen the original band cut-out with the missing length as in the second picture.

Usually the underwire will be in the band. There are some exceptions:
• a partial band instead of a full band
• the cup is rising above the band at midfront

In the pictures below an example of an underwired cup in a corset and a bra with partial band which cups you might want to exchange. A partial band means the band bridge between the cups is not connected to the rest of the band. In these cases the underwire can only be in the cup.

Let’s take a closer look what happens when you try to fit the new cups in the original band.
The double underwires are a serious problem. Some simple tweaking will not resolve this! The general rule is:
avoid changes in a cup pattern other than for a personal fit.
A solution could be to cut off the underwire area in the band.
But what is the width of the underwire area? In Merckwaerdigh patterns this will always be 0,75cm, in other brands this might be different. Still, It’s a drastic procedure and you need a lot of experience before you try this!

At midfront in this case the cups will end lower than the band cut-out. Some tweaking of the band can solve this:
cut the original band cut-out to where the new cups reach.

A FREE pdf file about this matter is available for download on the Merckwaerdigh FREE downloads page!

One thought on “FREE printable : how to exchange cup designs in bra patterns”